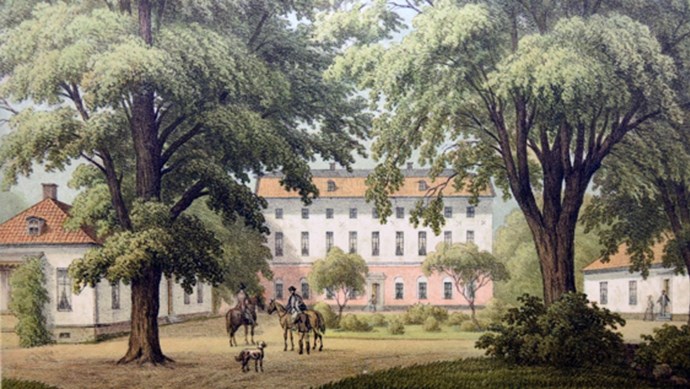 Djursholms Castle in the 1800s. 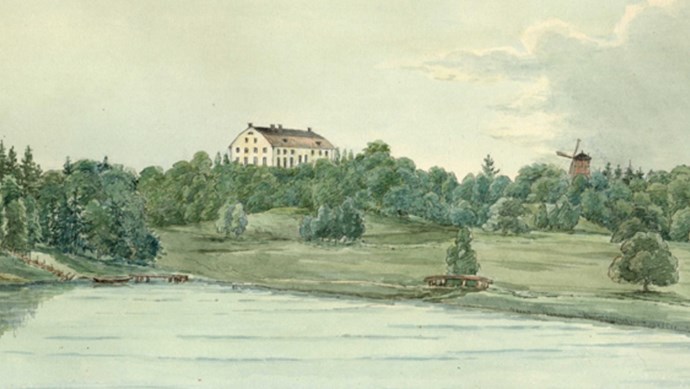 Djursholms Castle in the 1600s. 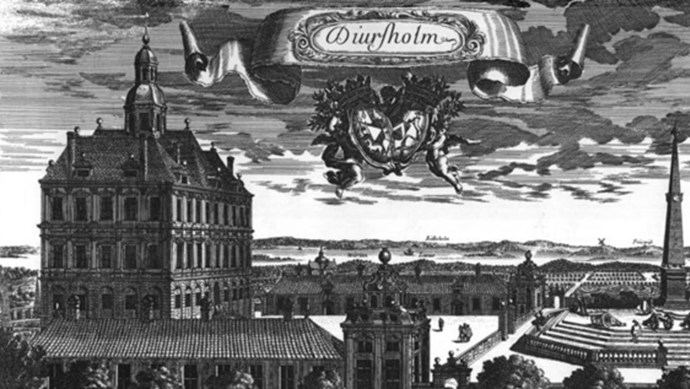 In the 1400s, Nils Jönsson Oxenstierna from Frössvik had a stone house built on the island of Gamla Djursholm (Old Djursholm). Through marriage Djursholm came into the possession of the noble family Banér in the early 1500s.

In the early 1500s, Nils Eskilsson Banér, a nobleman who was a kinsman of king Gustaf Wasa, is believed to have erected a stone house where the castle is now situated. This nobleman was executed in Finland for resisting King Christian II of Denmark's claim to the Swedish throne.

In the 1600s, Svante Gustavsson Banér had the castle rebuilt to its current appearance. The two wings of the castle were built at different times, the east wing during the mid 1600s and and the west wing in the beginning of the 1700s. Up to the early 1800s, the castle and estates surrounding it remained in the possession of the Banér family.

In the 1600s, Svante Gustafsson Banér and his wife Ebba Grip had the castle rebuilt to its current appearance. The estate was at its most extensive during the forty years of Ebba Grip's management after her husband's death. The estate included then not only contemporary Danderyd but also the island of Lidingö and part of Täby. The two wings of the castle were built at different times, the east wing during the mid 1600s and the west wing in the beginning of the 1700s. Up to the early 1800s, the castle and estate surrounding it remained in the possession of the Banér family.

Banérsalen - the heart of the castle

The great assembly room, Banérsalen, has a most interesting stucco ceiling created by the Italian artist Giovanni Anthoni and much of other alterations by the german builder Hans Zauch, in 1668. Both are famous for their work with Skokloster castle.

The stucco ceiling depicts Zenobia, the queen of Palmyra, begging emperor Aurelianus for mercy for her people. The paintings in this room are all family portraits of the Banér family. The Gobelin tapestry is Flemish, from the 15th or 16th century and was bought in New York.

From agriculture to early co-ed school

1815 the estate was purchased by Gustaf Fredric Wirsén who among other things equipped the castle with a broken roof. During the time the castle was in possession of the Wirsén family, the estate was developed into a model farm with a agricultural school in the 1860-1870s.

In 1889 the castle was purchased by Djursholms AB, the company that founded the suburb of Djursholm and was led by Henrik Palme. A refurbishment of the building was made, and it was rebuilt in a romantic German/Dutch renaissance style. The castle housed an office, school, telephone station and private apartments. In the wings of the castles there was a chemist and a postal office.

The most recent renovations of the castle were made in the 1960s, led by the architect Klas Fåhraeus. The romanticized details were removed and the building regained more or less its appearance from the Banér family era.

The castle, as we see it today, has been structurally altered and rebuilt on the remains of the older building. The interior has been altered to enable the castle to function efficiently in its present capacity as seat of the local government. Today, it houses the municipal office and a couple of administrative offices. The conference rooms and assembly hall are often used for weddings and parties.